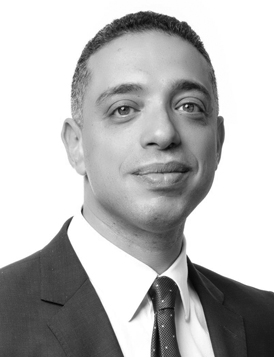 Mr.Walid Hassouna is the Chief Executive Officer of EFG Hermes Finance. In addition to his role as CEO of the non-bank financial institute and a member of the EFG holding Executive committee, he is the Head of DCM, and Chairman of Paytabs Egypt and EFG- EV.

Prior to joining EFG Hermes in 2016, Walid Hassouna was General Manager and Head of Structured Finance and Investment Banking at Bank Audi, where he closed structured and project finance transactions in excess of USD 15 billion over a seventeen-year banking career that began at Misr International Bank. He also structured and executed several award-winning deals, in project finance and M&A within Egypt and GCC, in addition to several investment banking transactions. He has also been the Head of structured finance and syndication in Banque Misr where he successfully managed to top the league table of the MENA region in syndicated loans.

Walid is a Cairo-University B.B.A holder, where he graduated with highest honors. He also holds an MBA from J. Mack Robinson College of Business, Georgia State University as well as Islamic Finance Qualification from CISI- UK.